A Good Friday (with monks!)

Yeah, I know you’re groaning at the title. I couldn’t help myself.

Today marks the 6 month anniversary of my move into the JPII House in Irving, and I’m still working on figuring out where everything is around here. At the beginning of Lent I discovered that there was a Carmelite monastery only a few miles away and went on a silent retreat there with some other men from the SMU Catholic community. I didn’t realize until fairly recently that there is also a Cistercian Abbey about a mile from my house. Between that, the Catholic University between there any my house, and the 2 other Catholic schools within a few miles of there, I feel like I’m living in Catholictown, DFW, TX.

Because I’m poetic and think things like this are cool, I decided that if I started Lent with some monks I should also end it with some other monks, so I decided to attend the Good Friday service at the Cistercian Abbey. It was amazing, and here are a few quick take aways from it.

1. Catholicism is beautiful. Stepping into that abbey for an hour and a half was like stepping in a time machine and travelling back to a more beautiful time. It had everything I should have been expecting if I wasn’t of the belief that it didn’t exist anymore, like monks chanting around the altar in Latin, and a choir singing something like 6-12 part harmonies behind us, in Latin. I also felt severely under dressed in my normal church attire khakis and button-up shirt as everyone else seemed to be wearing nice suits or beautiful long dresses. 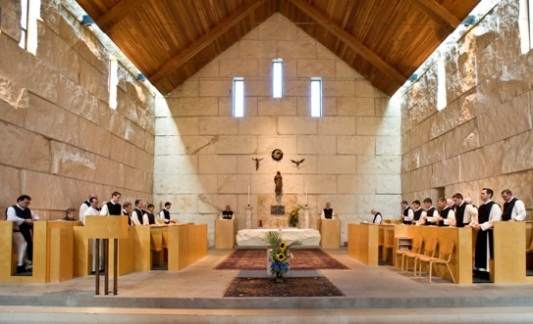 These guys rocked my world.

2. Our church is universal. Despite how different the service was, I was still roughly able to follow along with what was going on. The prayers were the same, though almost entirely in chanted Latin, and I could still follow the structure of the Liturgy of the Word and the (shortened, because we can’t actually consecrate the host on Good Friday) Liturgy of the Eucharist. Going for the first time on Good Friday where the service is already very different may not have been the best idea for the sake of me knowing what was going on.

3. Catholics are weird. It’s something that I was thinking as I was processing toward the altar to kiss the cross. From an outsider’s point of view, we must look absolutely insane. The monks chanting in Latin probably wouldn’t have helped either.

4. We’re all one big happy/dysfunctional family. I was amazed at how many familiar faces I saw at a church I was visiting for the first time. I’m not sure if I have more friends who regularly attend mass at the abbey than I realized, or if that’s just the cool place to be on Good Friday, but I recognized at least 10-15 friendly faces while I was there. Friends from the young adult council, UD community, Young Catholic Professionals, and even a friend from Rice who lives in the area now.

5. Everyone needs to experience something like this at least once. If you’ve never been to a monastery or abbey, especially if you’re like me and didn’t think they existed in the US until recently, I highly encourage you to check one out. It doesn’t matter if you’re Catholic, Christian, or don’t believe in God at all, I think it’s a beautiful experience to discover that the monastic tradition is still alive and well in the 21st century.