What makes Peter and Jean Valjean different from Judas and Javert?

And before you say it, the answer is not “The first two are good guys and the last two are bad guys.”

Over the past week and a half I’ve re-watched two great movies, the Passion of the Christ and Les Miserables. Although most of the Passion is focused on the suffering of Jesus, for this viewing I was particularly drawn to the characters of Judas and Peter. Both of them betrayed Jesus during the movie, Judas by turning him in the the authorities and Peter by denying him three times when those around him claimed that he was one of Christ’s disciples. And they did all of this despite spending the past few years as Jesus’ disciples and best friends. They ate with Jesus together, traveled with him, and prayed with him.

However, the similarities mostly end there as these two characters go their separate ways. Judas, overcome with guilt from his actions, is overwhelmed by despair and kills himself. He can’t forgive himself for the crime he has committed and decides that he deserves death.

Peter, overcome with guilt from his actions, is then called by Jesus to put his past aside and be forgiven. While not in the movie, the final encounter between Peter and Jesus in the gospel of John tells us that Jesus commanded Peter three times (the number chosen probably very intentionally) to feed his sheep. Peter goes on to become our first pope and the leader of the early church.

In Les Miserables, Jean Valjean and Javert are two good but flawed characters. In the beginning of the story, Valjean experiences an incredible act of forgiveness from the bishop (If you need a refresher, check this out). Towards the end of the story, he likewise forgives Javert, who had been pursuing him throughout the film, and lets him go free rather than killing him after he has been captured by the revolutionaries at the barricade. When Valjean was offered forgiveness, he allowed it to change his life. When Javert was offered grace, he had no idea what to do about it. Grace didn’t fit into his justice-driven worldview. For him, sin always deserved punishment. Valjean, he thought, will always deserve the penalty for his sins. And he, likewise, deserves to be punished for not bringing him to justice in his moment of “weakness” when he allowed Valjean to escape the sewers just hours later. 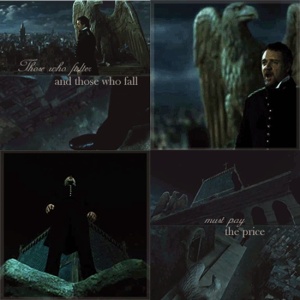 Being willing to accept grace and forgiveness is just as important, if not more so, than your willingness to give it. I have a theory about heaven. In this potential scenario, those who enter heaven are all those who are willing to accept Christ’s forgiveness after their death. They recognize their own failings and their need for Christ’s grace, and desire his love. Those who choose hell are those whose pride keeps them from wanting to be forgiven. They believe either that they have done no wrong and thus need no forgiveness, or that their crimes are too severe for God to forgive, or their pride keeps them from bowing to God and asking to be forgiven.

The humility needed to recognize one’s need for forgiveness and accepting grace that is offered to you is a trait that Peter and Valjean both had, but Judas and Javert lacked. Judas believed his sin was too great. Javert believed that no one deserved grace because justice must always prevail. It requires a great deal of humility to accept your own mistakes and ask to be forgiven. Pride keeps us from God in so many ways. Don’t let your pride keep you from seeking forgiveness for your own mistakes, and then striving to live a better life in the future.