You’re worth more than your paycheck

This is a repost of something I wrote around this time a year ago, well before I started this blog. I’m sorry to all of my readers for being so busy the past two weeks with work and school (hurray finals and term papers!). I hope to have time to write something new by this time next week after finals are over and I’ve returned from my trip to see my little brother graduate from college. 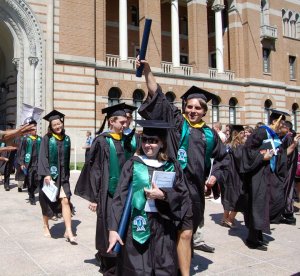 Hurray for degrees! Now what?

Last weekend I went to a lot of graduations. It was the first time I had experienced department specific graduations, including specific graduations for the schools of math, philosophy, and art. It made me think about what the value of a college education is. As an engineer at Rice, I was surrounded by people with the mentality that your degree is worth as much as you can get paid for having it. Engineers joked all the time, often directly to humanities and liberal arts majors (who we’d refer to as ‘academs’), about how worthless non-science degrees were. As engineers, our area of study was superior to theirs because on average, we’d be making more money after we graduated. Academs, we would say, were just going to end up working less desirable jobs that payed less, so they and their field of study weren’t as good as we were. I remember a specific halftime show that we wrote when we played UNT, a school known for it’s outstanding music program. Most people found the walkoff line “so remember, the next time you see a UNT grad, please remember to tip your waiter” to be hilarious, because it made us feel a lot better to think of how much more money we’d eventually be making compared to the music majors, whose major is so worthless that it would only lead to a career in the restaurant industry. (I know it was all in good fun, but the mentality is still there)

So why do we think that a person’s worth or field of study is worth as much as their paycheck is? Is our contribution to the world based on how much money we can make? Is our happiness even based on that? I think we, and I’m talking to anyone who thought at some point that their major was awesome because they’d make a lot of money some day, need to change our perspective on life because it sucks. 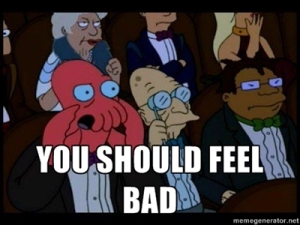 Don’t feel too bad though, because we’ve been forgiven for stuff like that.

Giving in to your own pride because you have more money in your wallet than your buddy who studied philosophy or English isn’t doing you any good. And tearing down the history major who chose to study what he loves rather than what would make him the most financially secure is pretty selfish, because all you’re doing is trying to make yourself look and feel better in comparison. It’s a form of bullying, plain and simple, and there’s no reason for it.

What would the world look like if our four choices for majors were physics, engineering, pre-med, and business? Think of how much our world would miss out on. Art, theater, literature, history, not to mention a working system of government (whether our current system works or not is still up for debate). So rather than discouraging people from picking majors that tend to make less money, we should encourage people to be passionate about whatever they do end up doing with their lives. A world where everyone was truly passionate about their work and truly desired to do the best job possible with it would be a much better one than a world full of people who got the “most valuable degrees.” That includes passionate and excited doctors, engineers, businessmen, and scientists, but it also includes philosophers, historians, writers, artists, actors, and politicians who are going to use their strengths and interests to make the world a better place than it was when they entered it.

A person’s worth isn’t based on how much money they make. Our goal in life should never be to make as much money as possible. It should be to care for each other, love our neighbors, do our work passionately and use our work as an avenue to make the world a better place. And when people decide on what major to study, they should be more focused on what plays to their strengths and passions than what fattens their wallets, and then not judge others with different strengths and passions than their own.

Is it that important to have the same religion? »
« The only ones out-breeding the Muslims