A Sunday in the life of a missionary

Welcome to part 3 of my “week in the life of a missionary” series. If you missed Saturday, you can read it here.

8:00am– Wake up and get ready for the day. Since we have a later start today, I also spend a bit of time reading and a little time writing my post about Saturday.

9:00am– Morning prayer in our chapel.

9:15am– Quick breakfast of some oatmeal bars that Marcella made last night. They are absolutely delicious.

9:45am- Leave for mass at Holy Name. Typically we go to mass at the cathedral or Holy Ghost on Sundays, but because today is the last day of their mission week, we are going to Holy Name again.

9:55am– Good thing we left early. Traffic is a mess because several roads are closed for a marathon going through downtown Denver. Looks like we’ll need to go back north if we’re ever going to make it south of downtown because the road isn’t going to open again for at least 30 minutes.

10:20am– Despite having to reroute, I still get my car full of people to mass before any of the other missionary groups, so we’ve got a few minutes to pray before mass starts. I see Kevin, a parishioner at Holy Name who gave a talk at the men’s trivia night on Tuesday, and his huge family who take up half of a pew right in front of us. His talk was memorable because it was the first time that I remember ever hearing someone say that they converted to the Catholic faith precisely because of its teaching on contraception and the value of human life. It seems pretty unusually because from my experience talking to converts, typically Protestants become Catholic after reading too much church history, or because of the Eucharist and what Jesus says in John 6, and then they learn to deal with the contraception stuff and eventually recognize the beauty of that particular church teaching later. Kevin and his wife have 7 kids with them at mass, two of which are adopted from Ethiopia and have down syndrome. I find myself enjoying mass a little bit more because two of his daughters keep looking back at us and waving at our group of missionaries with huge smiles on their faces. 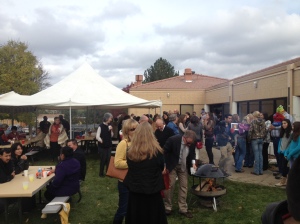 Octoberfest at Holy Name was full of good food and enthusiastic parishioners.

11:45am– Mass has ended and we go over to the activity center where the Octoberfeast happened on Friday, this time for their Octoberfest. Rather than being intended for mostly young adults like Friday’s celebration was, this lunch is designed for the entire parish community. The format was pretty similar, so I ate a lot of the same foods and drank some of the same beers. It was the first time that I can remember where a Catholic parish served beer after Sunday mass. I certainly hope it is not the last.

12:45pm– We have to leave Holy Name a little earlier than we would have liked so we can get back in time to help with a project at the Seton House that starts at 1. We almost leave without one of the missionaries because we can’t find him and he isn’t answering his phone so we had assumed he left with another car. As I am pulling out of the parking lot, he calls me and we stop to let him in the car.

1:10pm– So we’re a little late for the intended 1:00 start time, but we’re still the first car back to the Seton House. We’re told that we will be helping to paint an altar for a Day of the Dead (Día de los Muertos). I change out of my church clothes just in case I spill any paint on what I’m wearing, and then start painting after we’ve been given the instructions about how it is supposed to look when it is finished.

2:00pm– After only painting for a few minutes, I’m asked by Yvonne, our program director, if I can drive another missionary to an urgent care center because he is having an allergic reaction to a medication. Not good. So I drive the other missionary to the other side of the downtown Denver area where he is able to see a doctor and get a prescription which we then get filled on the way back home. It ends up being a pretty good deal for me, because instead of spending the next hour painting I get to watch The Nightmare Before Christmas on the TV in the lobby.

Tony shows off all of his hard work designing and assembling the Dia de los Muertos altar.

3:00pm– By the time I get home, most of the work on the altar is finished and it’s looking pretty good. Since that was the last real work that needed to get done, that means the rest of my Sunday can be used as a day of rest which also gives me time to finish up my blog post about Saturday. Lately, my rest time has also involved a lot of Pokemon X.

6:30pm– Maggie and I gather up some of the other missionaries who are around the house and go out to eat, which is a rare occasion for us since we live on a very tight stipend. We settle on a Mexican restaurant that is only a few blocks away which also has TVs which will satisfy the guys in the group who want to watch the Broncos vs Colts game. Dinner is pretty tasty, which is great because I was worried that I wouldn’t be able to find any adequately good Mexican food in Colorado after being spoiled by Tex-Mex growing up.

7:45pm– We return home and have more time for ourselves.

9:15pm– More free time before going to bed. I’m feeling a little homesick so I play through all 3 of my Emmeline CDs while playing some more Pokemon and then going to sleep around 11:00.

The adventures continue on Monday.