What are you willing to sacrifice to follow your conscience? 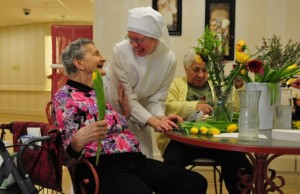 The infamous HHS Mandate just hit closer to home for me than ever before. The Little Sisters of the Poor are the latest to enter into the national spotlight for their fight for religious freedom and conscience rights against the Obama administration. The Little Sisters run the Mullen Home, a home for the elderly just a few miles from the house I live in, and it is one of the sites that I visit on a daily basis to drop up and pick up another missionary in our program so I’ve seen and heard about the great work that they do there. One of the Regis University students that I work with, a nursing major who volunteers there every week, told me that it is the best-run nursing home she has ever been to, both due to the low cost to live there and the high quality of care that the residents receive. Hearing about a group of humble nuns having to battle the government for their First Amendment rights feels so unreal that it seems like something straight out of a storybook.

Although I’m having more and more reasons to be optimistic about the rulings on the many lawsuits being filed across the country, since the courts so far are overwhelmingly ruling in favor of religious freedom and conscience rights, and even USA Today thinks that the Obama administration is stepping too far, it’s still scary that this is even a battle that needs to be fought. It’s scary that our president is threatening to fine Catholic schools, hospitals, nursing homes, and other businesses into oblivion in the first place. It’s scary that there’s a chance that the Supreme Court will rule in favor of the Obama administration, forcing the elderly poor that the Sisters serve to find new homes.

It’s scary because this is only a part of a larger trend saying that following what your conscience and your religion teach rather than the morals of the government is not just wrong, but it’s criminal. It’s part of a trend that states that freedom of religion means freedom to worship, and not freedom to live out your faith outside of the walls of your church, synagogue, mosque, or other place of prayer. It has gotten so ridiculous that, for example, the government is even forcing a man to bake a cake against his conscience or face jail time. Fortunately, we are still nowhere near the level of persecution that Christians experience in many parts of Africa and the Middle East, where every day people die because of their faith in Christ, but I still believe that freedom of religion is a right worth fighting for, whether the consequence of practicing one’s faith is death, imprisonment, or losing one’s business as is the case in the US right now.

Last week, one of my fellow missionaries asked a group of us if we thought any of us would ever be put into jail because of our faith sometime in our lifetime. Not so surprisingly, those in the group thought that they probably would. So the question is, if you are given the choice between denying your faith and going to jail (as is already happening), or possibly martyrdom, (as Cardinal George is famously quoted as predicting) what will your choice be? Do you have the self-sacrificial faith of the ancient Israelite (see Maccabees) and Christian martyrs (see Acts of the Apostles, and Christian history through the 21st century for that matter), or a faith grounded on comfort and ease?

It’s something that’s been on my mind recently. Do I have the faith to allow myself to be thrown into the fiery furnace like Shadrach Meshach and Abednego, who were commanded by King Nebuchadnezzar II to bow down to a golden idol or die? (Check out Daniel 3 for the story if you aren’t familiar with it) I wonder if I found myself in the position of Jack Phillips, the Little Sisters of the Poor, or the other Christian business owners who are fighting the HHS Mandate, would I have the same courage to face fines and jail time because of my faith, or would I cave, bow down to the modern golden idols, and go along with what the government wants me to do, as immoral as it is. I hope and pray I’d choose the former. 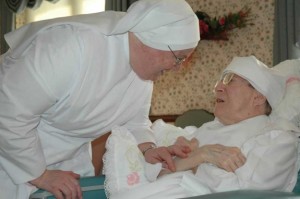 I encourage you to join the Facebook community for those who stand with the Little Sisters of the Poor against the HHS Mandate to keep updated on what’s going on in their particular court case. The Supreme Court has set the date to hear arguments against the HHS Mandate for March 25th, which is perhaps not-so-coincidentally also the Solemnity of the Annunciation.

Let’s love our enemies, and pray for those who persecute us »
« Pope Francis is Changing the Church, and the World, For Good

8 thoughts on “What are you willing to sacrifice to follow your conscience?”