Moral teachings are hard, but I wouldn’t have it any other way

The Catholic Church is certainly known for being uncomfortably demanding when it comes to moral issues. Earlier this month, I even saw news break that a majority of Swiss and German Catholics view the Church’s teaching on sexual morality to be “unrealistic” since so many people are now having sex before marriage and living together before exchanging vows. It seems to them, and probably a majority of Christians living in our times, that if a rule is too hard for most to follow, the rule shouldn’t exist at all. Those who shared the story and writers for many secular news agencies used it as an opportunity to discuss how the Church desperately needs reform because she is so out of touch with her people. The Church’s demands are just too stringent, they said, and she ought to conform herself to society if she wants to remain relevant in our modern society.

I sincerely hope the Church never changes its teaching to fit what is popular in society just so that people will feel better about themselves. The church has moral teachings for a reason. They exist not to control people, but rather to help them flourish as human beings. Blessed Pope John Paul II wrote in Veritatis Splendor, “The different commandments of the Decalogue are really only so many reflections of the one commandment about the good of the person, at the level of the many different goods which characterize his identity as a spiritual and bodily being in relationship with God, with his neighbour and with the material world.” Pope Francis likewise stated in Evangelii Gaudium, “As for the moral component of catechesis, which promotes growth in fidelity to the Gospel way of life, it is helpful to stress again and again the attractiveness and the ideal of a life of wisdom, self-fulfilment and enrichment. In the light of that positive message, our rejection of the evils which endanger that life can be better understood. Rather than experts in dire predictions, dour judges bent on rooting out every threat and deviation, we should appear as joyful messengers of challenging proposals, guardians of the goodness and beauty which shine forth in a life of fidelity to the Gospel.” 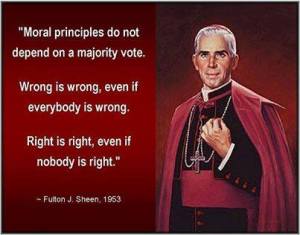 As two of our recent popes remind us, rules aren’t burdens, they are blessings. Too many people view moral teachings as a fence, when in reality they are more like guardrail separating a path from a ravine. If the Church, after further examination by her theologians and magisterium, suspects that a particular teaching is not helping humans flourish, then by all means she should reexamine it. But watering down moral teaching because it is unpopular would be as helpful to us as taking down guardrails on the side of a cliff because people don’t want to be restrained by them.

Jesus’ ministry on earth, which is now the job of the Church as well, was not to make people feel happy about the lives they are already living. The Church is all about creating saints. Father Robert Barron stated in his podcast last week that “The Church is not satisfied with producing spiritual mediocrities. Producing people who are, eh, basically good. It wants to make people perfect, even as their heavenly Father is perfect.” Father Barron also said in a recent article about the church’s moral teaching that “Its mission is not to produce nice people or people with good intentions; its mission is to produce saints, people of heroic virtue.”

The Church’s moral teaching is as stringent as it is because Jesus’ moral teaching was uncomfortably difficult first. Christ said that simply being angry or lustful are terrible sins. “You have heard that it was said to the people long ago, ‘You shall not murder, and anyone who murders will be subject to judgment.’ But I tell you that anyone who is angry with a brother or sister will be subject to judgment…You have heard that it was said, ‘You shall not commit adultery.’ But I tell you that anyone who looks at a woman lustfully has already committed adultery with her in his heart.” (Matt 5:21-22,27-28) The fifth chapter of Matthew is full of incredibly difficult challenges that you should get in the habit of reading before going to confession or anytime you are struggling with spiritual pride.

Fortunately, God’s incredible moral demands are met with God’s incredible forgiveness. God wants us to be perfect, but he doesn’t expect that everyone will get it right the first time around. What he asks of us is to come to him when we mess up, and ask for forgiveness and the strength to do better next time. Jesus may have taught one of the strictest moral codes ever written, but he also has one of the universe’s easiest penitential systems.