Have questions about homosexuality and Catholicism? The Third Way has answers. 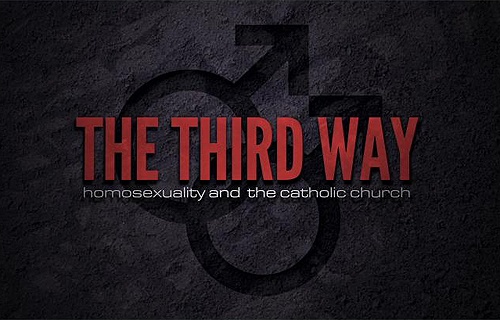 I recently had the pleasure of watching an incredible new video released by Blackstone Films called The Third Way. My friend Kevin Jones at CNA described the film as one in which “Catholics with same-sex attraction talk about their personal struggles and the comfort they find in Church teaching,” and show that Christian love is “the “third way” in controversies about homosexuality.”

The video can be seen here.

The Third Way shows Church teaching concerning homosexuality in a better way than anything else I’ve seen up to this point. I believe it has the power to show the world that there is another way to approach homosexuality that is based in both love and truth, without sacrificing one or the other.

“We do not in any way hate or condemn or fear or want to isolate you,” Fr. Schmitz said in the film. “At the same time we can’t embrace everything that you choose. So we’re going to choose this third way. And that third way is love. We’re going to love you.”

Another way in which the video succeeds is in its brutal honesty about the ways the Catholic Church and Christianity as a whole have failed in how we’ve interacted with those who have same-sex attraction over the past several decades. It shows that we, as a community, have dropped the ball. We have isolated a lot of people. A lot of people have had negative experiences, and we as Christians need to change and repent.

“Christianity is in a position where we need to start asking for forgiveness,” Catholic speaker and author Jason Evert confesses. “We need to say I’m sorry. Some of these people have suffered a lot, and that’s their notion of the Catholic Church… I confess, I took part in it… And I ask, I ask forgiveness on behalf of the entire community of people who experience these attractions… I did it.”

I also had a great opportunity on Tuesday to participate in a live Q&A hosted by my friends Scott Dougherty and Tony Vasinda of Project YM. They were able to bring in the The Third Way’s Executive Producer, Fr. John Hollowell, to answer questions following a screening of the film. The entire video of that Q&A can be found here. It was a great way to learn more about the motivation for the film and hear from a leader in the new evangelization.

Fr. Hollowell mentioned in the Q&A that while there has been a lot of positive feedback from many Catholics, the reaction was mostly negative from those on the far right and those on the far left. I believe that if you’re upsetting people on both extremes of an issue, you’re probably doing a good job of sharing the uncomfortable truth. Well done Blackstone Media.

I’d love to hear each of your thoughts on The Third Way after you’ve had a chance to watch the entire film.

Should I ever give money to a homeless person? »
« Pilgrimage to Chimayo: We grow from our journey, not our destination

2 thoughts on “Have questions about homosexuality and Catholicism? The Third Way has answers.”

Leave a Reply to So Your Country Just Redefined Marriage… Now What? | All That Catholic Jazz Cancel reply