SCOTUS, Political Polarization, and the Best Thing About the World Cup 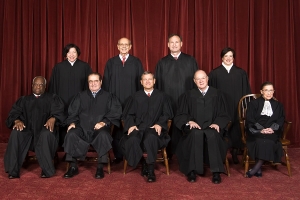 I’m sure I probably don’t need to remind anyone that yesterday was a huge day in the American political world. The Supreme Court ruled in a controversial 5-4 vote that Hobby Lobby and other businesses that are owned and led by religious people don’t have to choose between their religion and their livelihood. Christians around the country rejoiced that they would not be forced out of business by crippling fines, while many on the left criticized the decision, claiming that it was another step in the conservatives’ “war on women” and that bosses should have no right to make healthcare decisions for their employees.

To say that the decision was controversial or divisive would actually be a huge understatement, and it further highlighted a trend that has been making me more and more concerned out our country. The trend is the growing division and antagonism between those of different religious and political views. Long gone are the days when we sought to have constructive dialogue or were willing to recognize valid concerns that our political opponents have. Dialogue, especially in online forums and social media, has now been replaced by the spewing of pointless comments like “God I hate conservatives/liberals” “Truth does have a conservative/liberal bias” “Such massive ignorance from the left/right” which serve no other purpose than to pat ourselves and our political allies on the back and further alienate those from the other side from our conversations.

As with many issues before this one, including the topics of same-sex unions, abortion, and welfare, we as a people we have totally shut off dialogue with those that we disagree with for fear of having our minds changed, our opinions challenged, or our egos damaged. That’s why Fox and MSNBC have become such popular new stations. They continue to reinforce the existing beliefs of their political bases and pat themselves on the back while condemning their enemies. A vast majority of US citizens have decided that they are better off plugging their ears and shouting catchy phrases like 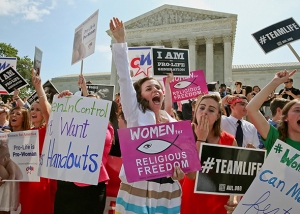 Look at all of those women out there waging a war on women! (Photo by Mark Wilson/Getty Images)

“If you want contraception, just go buy it”

“Get my boss out of my bedroom”

and one of my personal favorites because I’ve seen both supporters and now even dissenters of the decision use it to make their points in the past 24 hours:

“People should not have to choose between their own religious freedom and paying bills and rent.”

Many on both the liberal and conservative sides don’t want to listen to any concerns that the other side has and would much rather dismiss them all together as insane and immature. Conservatives are quick to paint liberals as irresponsible children with entitlement issues who want someone else to pay the costs of their optional, recreational activities, while liberals paint conservatives as uncaring, insensitive, greedy, and oppressively ideological. And of course, both sides are huge fans of reminding each other how dishonest and ignorant they are.

Although few would ever want to admit it,  yesterday the conservatives and the liberals were both actually in agreement that there is a serious problem with the fact that these days employers are typically responsible for choosing what kind of health coverage their employees get, whether it is because it paves the path for the government to attempt to force business owners to violate their deeply help beliefs or because it gives a person’s boss the ability to choose what someone does or doesn’t have covered in their insurance. This is why the 9 brightest and most respected legal minds in the country still had a hard time coming to a strong consensus one way or the other.

But rather than try to seek out a solution that can come closer to making everyone satisfied, we’d rather just continue the endless argument about why the other side is completely and helplessly wrong about everything and how bad we feel because they aren’t able to see it for themselves. Yesterday I saw dozens of Facebook posts about why the SCOTUS decision was the best/ worst thing that has ever happened in this country, but only one lone comment saying anything like this, which came from a former co-worker:

“The Hobby Lobby case, more than anything else, highlights how stupid it is that Americans get their health insurance through their employers rather than through government or choosing on their own.”

Now, this may sound crazy, but this then started a conversation about how we can fix the mess that we’re in and cited interesting studies about how other countries are trying to make healthcare high quality and affordable, rather than starting a much more typical display of anger and rants about how horribly misinformed everyone who doesn’t share their opinion must be.

Which brings me to one of the many reasons why I love the World Cup, which continues today with the USA’s first (hopefully of several) knockout game against Belgium. For a few hours every few days since the World Cup began, it seems like the United States is actually united on something for the first time since, well, probably the last Olympic games. We finally remember that there are bigger opponents than the “ignorant liberals” and the “heartless conservatives.” Enemies like Cristiano Ronaldo.

The World Cup reminds us that there are things that we… now brace yourself because this may be shocking… actually agree on, like how Belgian Waffles aren’t really all that great. It’s a force strong enough that it will even get my fellow craft beer fanatics to stop drinking Belgian beers for a day because they love being a part of the USA even more than they love a nice Beligian Tripel! We’re reminded that before being Democrats, Republicans, Libertarians, and Independents, we are all Americans. If we remembered that more frequently, we’d be more willing to recognize the concerns of our opponents, listen to each other, and find solutions that don’t leave one side or the other predicting the downfall of our nation.

“You have heard that it was said, ‘You shall love your neighbor and hate your enemy.’ But I say to you, Love your enemies and pray for those who persecute you, so that you may be sons of your Father who is in heaven; for he makes his sun rise on the evil and on the good, and sends rain on the just and on the unjust. For if you love those who love you, what reward have you? Do not even the tax collectors do the same? And if you salute only your brethren, what more are you doing than others? Do not even the Gentiles do the same? You, therefore, must be perfect, as your heavenly Father is perfect.” Matthew 5:43-48

I believe that we will win!!!