Every year as the end of December approaches, we’re bombarded by advertisements from gyms and weight loss drug companies talking about making a resolution to lose weight and get in better shape during the new year. While I could always benefit from getting a little healthier physically, this year I decided to focus on a resolution that would help me get in better shape spiritually.

My New Year’s Resolution for 2015 is to learn from the saints. Each month this year, which I decided to start with the liturgical new year a month ago, I’m focusing on learning about a new saint that I’ve heard about and admired, but don’t know much about. As Catholics, we know the names of lots of saints, but most of us know very little about what they did, what their prayer life looked like, what they wrote about, and why they fell in love with God. I can tell you to pray to St. Anthony when you lose something, but I don’t know much about him. I know St. Francis cared for the poor, but I don’t know what he did that made his approach to poverty different. I know that St. Teresa of Avila is a doctor of the church, but I couldn’t tell you why. 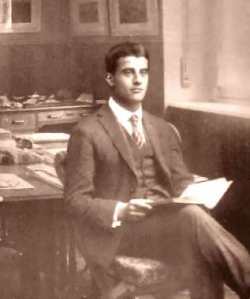 I started with Blessed Pier Giorgio Frassati for December 2014 because I’ve heard a lot about him over the past year and even have had a few friends complement me recently by saying that my personality is a lot like his. During the past month I read a book about his life, prayed for his intercession, and reflected on his writings and the details of his life as I sought ways to emulate his attitudes and actions in my own life.

I learned that I do actually have a lot in common with Frassati, and if I grew up 100 years earlier in Italy and did a significantly better job of thinking about others before myself and was more comfortable taking risks for the sake of the well-being of others, our lives may have overlapped a lot.

The son of a wealthy family, he was a young mechanical engineer who felt called to evangelize the world as a lay person working alongside the working class rather than as a priest. Frassati loved the outdoors, was very social and relished humor and good humor, and had a number of close friends who he called “The Shady Characters.”

Above all he cared about the needs of the poor and had a deep love for Mary and Eucharistic adoration. His friends described him as an “explosion of joy.” Pope St. John Paul II called him a “man of the beatitudes” during his beatification ceremony.

I encountered this quote of his towards the end of my study of him, which demonstrates his love for the Eucharist: “When you are totally consumed by the Eucharistic fire, then you will be able more consciously to thank God, who has called you to become part of his family. Then you will enjoy the peace that those who are happy in this world have never experienced, because happiness, oh young people, does not consist in the pleasures of this world, or in earthly things, but in peace of conscience, which we only have if we are pure of heart and mind.”

Unfortunately his life was cut short by polio at the age of 24, and it wasn’t until his funeral that his non-religious parents really began to understand who their son was when they saw that during the mass the church was filled not entirely by wealthy friends of their family but with the homeless friends that Pier Giorgio had made during his brief lifetime. It is suspected that he likely caught the disease from those he was serving because he cared more about helping them with their needs than about even his own health.

He truly understood what it meant to live in solidarity with the poor. A friend once asked Pier Giorgio why he always chose third-class on the train when he could clearly afford better. He answered, “Because there’s no fourth class.” Although he grew up in a wealthy family, he never took on their lifestyle, choosing instead to give his material wealth to the poor, running home by foot some days because he’d given away his bus money, and returning coat-less when he’d encountered a man, woman or child who didn’t have one.

Frassati was never content with a life of mediocrity, but took as his motto “Verso l’alto” – To the heights!

I’ve already seen the fruits of becoming friends with Frassati in my own life, and now I’m getting excited to meet the other saints on my list. If you’re still looking for something to do this year, consider getting to know the saints. Make a list of some saints you’ve always wanted to learn more about. Maybe you devote each month to a new saint. Maybe you change it up every other month or once a quarter if you don’t have as much time or want to get in greater depth with only a few saints.

Here’s my very tentative list if you need any inspiration-

May- St. Benedict of Nursia

December- St. John of the Cross

Do you have any other favorites that I should consider for my list? Let me know.

Can the Supreme Court Get it Wrong? MLK Jr Thought So. »
« You Can’t Be Christian and Support Torture