All That Catholic Proposal

The Catholic blogosphere has been obsessed with marriage and the family lately, and rightly so with the Pope’s recent visit to the USA for the World Meeting of Families followed closely by the Synod of Bishops on the Family which concluded earlier this week. Pope Francis loves talking about the importance of the family, and has made many claims about the power of the family and the importance of its stability in the flourishing of society.

This may be one of the many reasons why I decided to try the whole marriage thing out for myself and ask the love of my life to marry me two weeks ago. Now that I’ve told the story about 50 times over the past two weeks with all of my friends who wanted to hear the story (that would be… let me count… every single one of them) it’s time to let all of my other friends who I don’t get to see face to face on a regular basis know how it happened.

The main entrance to the Spiritual Life Center, featuring a collection of statues depicting the wedding at Cana.

Last July my girlfriend April and I drove from Dallas to Kansas City for a wedding and along the way stopped at a retreat center in Wichita called the Spiritual Life Center. April gave me a tour of the campus and described it as her favorite place in the world. With the beautiful greenery, religious artwork (including a complete collection of icons of every Doctor of the Church), and incredible atmosphere of serenity, I knew that if I was going to propose to her at any point in the future, this had to be the place where it would happen. By the end of our nearly week-long trip through Kansas and back together I knew that by the end of the year I wanted to pop the question, and fortunately the perfect opportunity arose when I found out just weeks later that there would be a TEC (Teens Encounter Christ) retreat there in mid-October that April really wanted me to attend.

After talking to my spiritual director about it a few weeks later, I had to find a way to get the blessing of her parents. Fortunately we already had trips to Wichita (where her dad lives) and Kansas City (where her mom lives) planned in the upcoming months.

Talking to her dad was pretty easy. We were already on the fence about whether I should stay with her dad or in the basement of her friend’s house, so I just suggested that I stay at her dad’s house the morning before the wedding so the girls could have plenty of space to get ready without worrying about me getting in the way. We had a nice conversation over breakfast about my plans for the future, my relationship with his daughter, and how excited we both were about the possibility of our families joining.

We both had a great time at Boulevard Brewery in Kansas City, but the alcohol hit one of us a lot harder than it hit the other.

Finding alone time with her mom was a bit trickier to work out since we were both staying in her home and it would be difficult to plan any time away from April. Fortunately I got lucky and found an excuse to help her mom print out our boarding passes in her basement while April was…recovering… from our excursion to Boulevard Brewery that afternoon. We talked for about 10 minutes without April realizing how long we had been down there.

After getting the blessing from both of her parents and finding the perfect ring with the help from her sister and a good friend, it was time to head to Wichita for the final phase. But there was still one missing detail to be planned. April had talked before about her hope that there would be a photographer there to capture the moment forever whenever she got engaged. I still didn’t have a photographer of any kind lined up, especially not one in Wichita where I knew only a few people.

On the first night of the retreat I was asked by my roommate for the weekend how I had heard about TEC. As the only candidate who didn’t live in Kansas and the only one over the age of about 22, I definitely stood out and left a few folks wondering what my story was. I explained how important TEC was to my girlfriend and how she had wanted me to attend the retreat at some point. He seemed impressed that my relationship meant enough to me to want to drive over 5 hours for a retreat and asked if I’d thought about marriage or looked at any engagement rings.

“Actually, I have, and it’s in my suitcase right down there on the floor. I’m planning on proposing in two days.” I paused. “But there’s still one problem I have to figure out. She really wants pictures of the moment and I haven’t found anyone to help me out with that yet. Any chance you’re free for about 30 minutes after the retreat is over to help me out?”

He got really excited about the idea and the opportunity to be involved in such a special moment and told me that he actually owns a real camera which was about 10 minutes from the SLC at his house, a significant improvement from the smart phone I was expecting to use.

The rest of the retreat was amazing, and I encourage you to see if there is a TEC retreat in your area if you’ve never been on one.

April picked me up from the retreat around 5pm on Monday evening and I expected that we would then have a chance to change into nicer clothes for the date night that I had proposed (pun intended) for that evening on our way back to celebrate the fact that we had been dating for 10 months as of earlier that week. But as soon as she got there she was ready to hit the road so that she’d be able to say goodbye to her friend Alexis who had to start a shift at work in about 30 minutes. I started to panic but realized there was nothing I could do to keep her from meeting up with her friend so I got in the car hoping I’d be able to come up with a valid reason to return to the SLC.

By the time we met up with April’s friend I apparently looked visibly agitated which I was somehow able to attribute to exhaustion from the retreat. As we were about to leave, April told Alexis that we were going to hit the road and then change into nice clothes at a nearby gas station so we could get dinner somewhere in Oklahoma City. I needed to come up with an excuse to backtrack to the SLC quick, so I told April I’d love to start off our date night with prayer with her since we hadn’t had time for that together all weekend. She was a bit suspicious at this point that something was going on since I’m usually much more focused on being punctual and sticking to the schedule. Sensing what might be to come, April later described the next 10 minutes returning to the Spiritual Life Center and changing into nicer clothes as the longest 10 minutes of her life as her mind raced about what might be happening.

We got out to the stations of the cross garden behind the building and I spotted my roommate praying at the 8th station, which we had decided was better cover than just hiding in a bush and hoping he wouldn’t be seen. This prompted two very different thoughts to cross both of our minds:

Alex: “Oh wow, I’ve kept Sam waiting here for so long. I better hurry up so he can get out of here and move on to the rest of his evening.”
April: “Typical Catholic, praying even after the retreat is over. If Alex is proposing here, I hope that guy leaves. Otherwise that would be super awkward.”

In the words of the great Inigo Montoya: This station does not mean what you think it means.

We began praying what I thought would be a pretty straightforward stations of the cross mediation. I had printed out a scriptural meditation written by Pope St. John Paul II to read through, but hadn’t really looked at it closely enough to realize that it was an alternative to the traditional stations of the cross, the stations that (of course) were presented in the garden where we were praying.

So we got to the first station, “Jesus is condemned to death,” and I looked down to our meditation to find “Jesus in the Garden of Gethsemane.”

This continued for 12 more stations where we saw an image for one station but were reading scripture that lined up with something else, but by station 14, “Jesus is laid in the tomb,” we finally had one that actually matched the scriptural meditation.

We finally arrived at the 15th station, The Resurrection, and after concluding our final prayer I asked April if she would like to finish a novena to St. Philomena, one of April’s favorite saints, that I had been praying for the previous eight days. The intention was “For wisdom in discerning my future, and if it is God’s will and hers, a happy and blessed engagement period with the love of my life, April.” 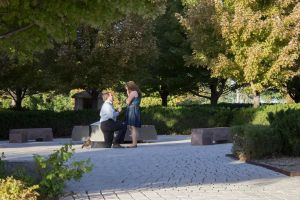 Once April looked down to see the intention about one line into the prayer, she stopped reading it aloud and I had to do the rest solo. I got down on one knee and asked her if she would marry me, and she said “Yes!!!” immediately.

After one of the longest hugs of my life, we went over to say hi to our photographer and spent the next 15 minutes in the “rock chapel” inside the SLC to pray for our future together.

Then we celebrated with margaritas and dinner at Jose Pepper’s, April’s favorite Mexican restaurant in Wichita. It was pretty much the best day ever.

God’s Command to Welcome the Stranger Still Applies »
« Reexamining Pope Francis’ “Who am I to judge?”

One thought on “All That Catholic Proposal”